This week, on 27th April 2020, under the presidency of the Dominican Republic, the United Nations Security Council held an open video conference on Youth, Peace and Security.  The debate builds on the landmark resolution 2250, which was passed almost 5 years ago. There were 4 briefers at the debate: UN Secretary General H.E. Antonio Guterres, UN Youth Envoy Jayathma Wickramanayake and two young peacebuilders, part of the UNOY network: Olla Al Sakkaf from Youth Without Borders Organisation for Development in Taiz, Yemen and Gatwal Gatkuoth from Young-Adult Empowerment Initiative from South Sudan/Uganda.

What did Olla and Gatwal share with the world? 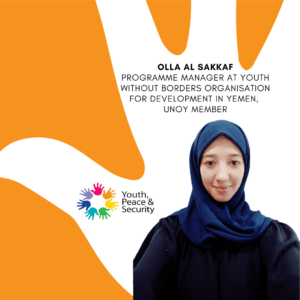 Excellencies, distinguished delegates, and fellow young people, I hope you are doing well during these difficult times. Thank you, Mr President, for your kind invitation to present before you and the UN Security Council members.

My name is Olla Al Sakkaf. I am a 25-year-old peacebuilder. I was born and I grew up in difficult circumstances in my country, Yemen.

I am here today as a representative of the United Network of Young Peacebuilders, a global network working to end the violence of youth exclusion, transforming power structures to enable meaningful youth participation, and offering a platform for youth to act together on decisions that affect them.

The world is scared because of the outbreak of Corona Virus. All day, you are following the news about the increasing number of victims. You are afraid of losing people you love or even losing your own life. Your children cannot go to school. You do not trust the health system any more.

In Yemen, there are few recorded cases of the Corona Virus. However, my fellow citizens and I understand what the world is going through. We feel you and we pray for you. What you are experiencing has been our reality since the beginning of the war in 2015. People are asked to stay at home, but have you thought about millions of displaced people around the world, who don’t have houses to take shelter in?

I live in Taiz, which is a city under the siege since 2016. People are forced to travel for 5 to 6 hours from one part of a city to another, when it used to take us 10 minutes. I have attended the funerals of my friends more than attending their weddings. I wake up every morning staring at the sun, not knowing if I am going to see it again or if this is going to be my last day. When I meet my friends I cannot enjoy my time with them, because I am afraid it will be the last time I will see them. I walk in the streets feeling scared to be killed by a landmine, airstrike or stray bullets. We face death everywhere and at every moment.

The situation in Yemen is at its worst. Five years of ongoing armed conflict have exhausted not only the infrastructure and systems of health, education, economy, etc. but also the people. For the second time, Yemen is the home of the worst humanitarian crisis around the world with 3.65 million IDPs, a massive cholera outbreak, recent floodings, and widespread hunger.

In all this darkness, there is a glimmer of hope. Although we lack support, opportunities and recognition, young people in Yemen 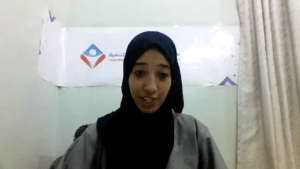 are doing our best to survive and build a better future for our children. Across Yemen, we are cleaning public places, informing people how they can protect themselves against Covid-19, and risking our lives to save victims from the floods in Aden and Sanaa. Youth organizations are working with their communities and authorities to enhance the capacities of the health care system by restoring health facilities, provide them with sanitizers, and train medical staff.

Our efforts are not only in response to the Corona Virus, but also to build peace and re-normalize the public life. Youth-led organizations are playing an important role in bridging humanitarian work and the peacebuilding process, as reported by the Independent Progress Study on Youth, Peace, and Security.

Youth Without Borders Organization for Development is an example of such a youth organization, which I am a part of. It believes in the energy and power of young men and women to build and sustain peace. Youth Without Borders is working to rebuild the social fabric, peaceful coexistence, and security in our communities through capacity building, awareness raising, advocacy and research. We do not only target young men and women, but also other community members, state institutions, local authorities, community initiatives, private sector.

We, young people, can’t bring peace and prosperity to Yemen alone. We need the international community to support, invest in, and strengthen our work:

Mr President, as young people, we stand ready to support all actors in pursuing and upholding the Secretary General’s call for a global ceasefire, in order to focus on the response to the current pandemic. When under a global threat, the time to act on peace is now. 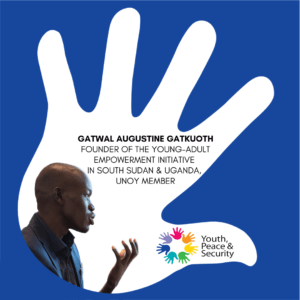 My name is Gatwal Gatkuoth. I come from South Sudan – the world’s youngest nation.

My father was born during the ​first Sudanese civil war in a small village in Southern Sudan. My father cannot write and read. He spent most of his youthful life doing two things: hiding for safety and herding his cattle in relative peacetime. The second Sudanese civil war forced me out of my parents’ care as early as 11, in 2002. Eight years later, in 2010, I returned to South Sudan to be reunited with my parents.

Even though the experience for me was so traumatic, I could not possibly imagine the pain it had caused them. I was lucky to end up in a refugee camp in Uganda where I found education that changed my life positively. 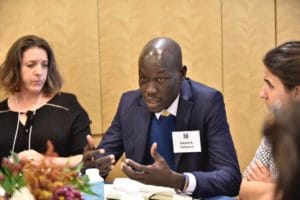 For me, peacebuilding has become a necessity. I want to break the cycle of conflict experienced by my father and myself, and contribute to a peaceful future where my own children don’t have to experience violence.

To serve the purpose, I founded the Young-adult Empowerment Initiative in 2015, to strengthen the operational capabilities of young men and women in South Sudan to create a peaceful society and drive social development in their local communities.

From the first through the second Sudanese civil war; to South Sudan’s post-independence political unrest, young people have always been at the heart of peace and security, as recognised by UN Security Council Resolution 2250 on Youth, Peace and Security. 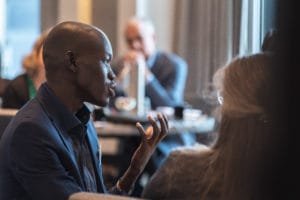 Young people in South Sudan shaped the peace process through their participation in the High Level Revitalization Forum and alliance-building with women groups, which resulted in the inclusion of young refugees in the negotiations and increased youth participation in broader governance structures.

Youth outside the negotiation room were also key in monitoring the peace talks and putting pressure on the conflict parties, for example through a social media campaign called #SouthSudanIsWatching, which was launched by the South Sudan Civil Society Forum (SSCF).

In Uganda’s refugee settlements, refugee-led youth initiatives including my own organization are unlearning violence and negative stereotypes through peacebuilding. We are identifying our concerns and aspirations jointly as South Sudanese youth; not as members of 64 different tribes.

Recent developments include the creation of a coalition of youth-led civil society organisations in Juba, the appointment of the first national minister in charge of youth affairs in the Unity Government, bringing young people’s concerns an inch closer to the decision-making circle.

Despite these significant achievements, young people continue to face structural barriers to political, social and economic processes, as mentioned by the Secretary General in his report. I will now highlight three challenges felt by my peers in South Sudan:

What must be done to make the youth demographic dividend, a peace dividend for South Sudan? Mr. President, 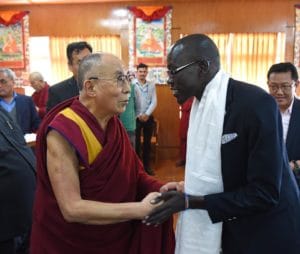 Here are four ways in which the international community can support young people’s contributions to peace and security in South Sudan and beyond:

Thank you, excellencies, for your diligent attention. [END]

Peacebuilding in South Sudan looks to refugees in Uganda

Nearly 900,000 South Sudanese refugees currently live in Uganda, where many live in waiting for an implemented peace agreement.... read more

In country hosting most refugees in Africa, support for refugee-led groups and local leaders is key amid COVID-19 fight. Jambiel... read more

Even amidst the challenges of the COVID-19 pandemic, countries must do more to harness the talents of young people... read more